It's the stuff from which fears are realized, ‘whys’ are birthed and the deepest of soul pain claws at your throat.

She shouldn't have to walk out hospital doors with empty arms and a breaking heart.

Shouldn't have to rouse from a dream where he is still alive and happy and giggling... only to enter the hollow reality that his bed lies untouched.

She shouldn’t have to.

She shouldn’t have to choose what he’ll wear to his funeral.

Shouldn’t have to stand by his coffin holding a handful of Kleenex, unfulfilled plans and not enough memories.

Some question God.  Wondering how an all-knowing, all-loving God could allow such grief to take place?

We listed out the the good his parents had done – their love for others… the ministry they’d birthed… the church they’d planted.  We reminded God of the crazy faith they possessed – their outlandish obedience.  Obedience that would scare the mess out of most Christians.  We considered the complete devotion to God… and wonder why?

Why did God allow their son to die?

They didn’t deserve this! 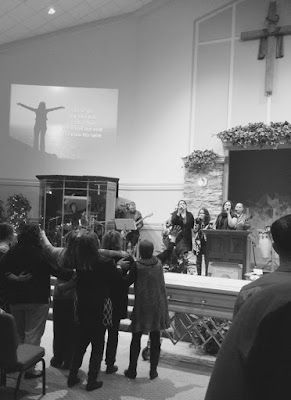 Yet as I watched my friend mourn the loss of her two-year-old son last week, I witnessed a strength that defies all earthly explanations.

For on a cold day in Michigan, as the winter winds swirled through the headstones and out over an open grave in a small town cemetery, a young mother cried in a church down the street.  Before her, a tiny white coffin held the body of her little boy.

There at the very point where her greatest loss and deepest fears were realized, this grieving mother rose up and worshipped...and in her worship, God came near.

There’s a surreal beauty that comes from a heart that’s surrendered.

Through her pain, Malyn found comfort by choosing to worship the One who had given Camden to her in the first place…this child who needed a family and a home and a name.  She invited the congregation to sing one of Camden's favorite songs with her.

And it is well

With me.
(Bethel Music)

Malyn's act of release and surrender shook the place, leaving no one untouched.


And in it we witnessed the power of love – no matter the cost. 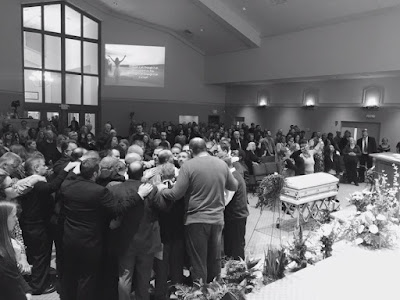 You see, loving comes without guarantees.

Love makes us vulnerable to pain.

Brian and Malyn were not promised thousands of tomorrows with their son.  Oh, they hoped for them – likely hadn’t considered the alternative.  What we saw on the day of his adoption was the beginning of a lifetime of happy memories…and really – that’s exactly what they got… even if the lifetime was much shorter than anyone could have imagined.

So the question comes down to this - is love worth the risk?  Worth the possibility of pain?  Worth the price of loss?

Some would lash out at God – blaming Him for not stepping in.  Accusing Him for allowing such tragedy.  But the truth is this - death was never God’s plan.  He never wanted tiny coffins.  Never wanted empty cribs, crying mothers and hurting fathers.  That wasn’t His original design.

On the day sin entered the world, God the Father was the One left with empty arms, broken dreams and unfulfilled plans.  The separation brought Him such grief and He longed for what once was…wanted it so much so that He took a risk and laid all that He had on the line in hopes of winning us back.

The death of His own Son, Jesus, was the price God paid for the chance to love us and call us His own…and He did it knowing there was a possibility we’d turn Him down.

It was a risk, but He did it anyway.

Did you know He loves you that much?

Loved you enough to risk it all?  All in the hopes that you would accept the love He has to offer?

He did and He does…and He’ll never stop… because death might separate, but it can’t keep a Father from knowing your name, longing to hold you and loving you still.

The offer stands ready... I hope you will receive it.

(A GoFundMe page has been set up to help with the funeral, medical and adoption expenses for Camden.)

If this story has touched you, please share it with others.  Camden's life impacted us all and we want many to know the love he taught us in just two short years.
Posted by Lynette Carpenter at 6:30 PM

Very well written, Lynette. You captured God's loving heart so well, and reminded us that God's original design was not for death, but for life. I'm inspired by these reminders.