The following is a monologue I wrote for advent at my church this year.  I hope it will encourage you this Christmas! 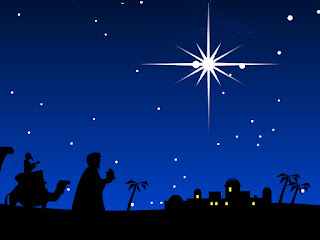 “There’s a star, Mary.”  Joseph’s words still ring in my ears.  I was sitting by the manger entranced by the splendor of new life.  Baby Jesus was sleeping and I couldn’t stop drinking in the beauty of his dark eyelashes brushing against his cheek.  The profile of his tiny nose, the smell of his soft, warm skin, his ten little fingers…ten tiny toes…  it was a moment I’ll never forget.

I turned at Joseph’s words, “A star?”

He nodded, “Yes, you should come see it.”

I turned back to gaze at my newborn son.  If I were to be honest, I was tired.  Stepping outside to gaze at the stars didn’t really appeal to me.  By that point, my body ached and I was still weak from the hours and hours of labor I had just experienced.  More than that, I was weak in spirit.

I had just witnessed the miracle of birth, yes.  I knew that the Child laying there before me was the Son of Almighty God.  I knew that what I was living through was unlike anything any other woman had ever experienced before me… still a virgin, yet I had given birth.

But even that couldn’t stop the doubts racing through my mind.  Why had God chosen me?  ME!  Mary of Nazareth!  I was a simple girl from a simple town and there was nothing exceptional about me!

I had never doubted God the Father’s wisdom before, yet now as I sat there, alone, far from home, overwhelmed and afraid, I couldn’t help but question.

Thankful though I was for a roof over my head, I squirmed in embarrassment and an overwhelming sense of inadequacy.  What had Joseph and I missed?  How was it that we hadn’t been better prepared for Jesus’ arrival?  When had everything gone so wrong?  The Messiah should never have entered the world in these conditions!  What must God be thinking of us?  Was He even now questioning His choice in calling me to be the mother of His only Son?

As I sat staring at the most beautiful and precious Child I had ever seen, I was filled with fear.  Panic gripped at my soul as I considered all I had studied in the past nine months.  I knew why He had come!  I knew what He was called to do!  Still, I fought it with every fiber of my being!  The love I felt for Jesus was so strong it consumed me.  I grabbed His tiny fist, terrified, longing to run away with Him – to protect Him from the evil in the world.  “Why?”  I began to cry softly.  “Why had God called me to this?  The path before me was daunting.  If God knew me better than I could ever know myself, why, in all His infinite wisdom, did He call me, this ordinary young woman, to such an extra-ordinary life?

“Mary?”  I saw Joseph again through the soft glow of the doorway and I quickly brushed away my tears.  “Come love,” his voice was full of an excitement I didn’t feel. “Come see the star.”  As he spoke, he came to me, and gently lifted me up into his arms. With great care, he took me outside.  The night air was cool against my skin, and I remember being surprised by the group of shepherds that had gathered outside our door.  Most of the men were gazing up into the dark sky, pointing excitedly as they called to one another.

Joseph set me to my feet and I turned to see where everyone was pointing.  What I saw left me breathless.  I gasped in disbelief!  There, above that little stable, shone the brightest and largest star I had ever seen.  It was unlike anything I had ever witnessed before.  The light glowed so brightly, I could feel it’s warmth on my face.

Immediately, my mind went to my encounter with the angel nearly a year ago.  Then I recalled the moment when I experienced the presence of God’s Spirit coming over me.  Like those significant moments, I knew that this, too, was a miracle.

A shepherd behind me spoke, softly, “This star!  It has led us to the Messiah!”

Tears filled my eyes as I realized what the star signified.  Just moments before, I had felt like a failure.  I was certain that I couldn’t be the person God was calling me to be.  I felt terrified and alone.  But now, here, I was reminded of the faithfulness of the God I served.  He had been with me during the difficult days of announcing my pregnancy to friends and family.  He had provided my every need throughout the past nine months.  He had changed the heart of Joseph, the man I loved, to believe that this Child was, indeed, the promised Messiah.  And…I turned to look again at the simple little stable before me, and yes, He had led us to this place.

I was immediately reminded of the words in the Holy Scriptures of Isaiah where the Lord declares, “My thoughts are not your thoughts, neither are My ways your ways!”

The star was there to lead people to Jesus.  And on that beautiful silent night in Bethlehem, that star led me to the feet of the One who loved me.  There I discovered it wasn’t about how weak and frail I was, it wasn’t about my inadequacies or my doubts – instead, I realized what He had called me to, was for the purpose of bringing glory… and honor… and admiration… and praise to Him!  The star stands to remind us that God uses our weaknesses to convey His power to a world that He so desperately loves!

I think back to that night often and the truth is this, many unknowns still lie before us, but look to the star!

There are times we are called to take steps on a path we cannot see - follow to the star!

There are circumstances we are called to face – but remember… remember the star!

There will be sorrows and joy!  There will be gain and loss… but my people, never forget the Star!  There you will find the One who came to give you a life of joy, peace, and love.  He will never leave you alone!  He is and always will be faithful.

There’s a Star, my friend.  Come to Him to find peace.   His name is Jesus and He is the Bright Morning Star.

Posted by Lynette Carpenter at 3:14 PM

Mary's monologue is beautiful. Thank you. Am I allowed to use it in our Carol service? Regards, Rowley Cooper.

Yes, you are very welcome to use this.