I've heard from many different women about their own experiences with miscarriages and infertility.  Several touched my heart so much and have been sitting in my inbox waiting for me to post them here for you as well.


Today’s post is from Krista who has experienced three miscarriages. She and her husband, Caleb are still waiting, praying and believing for a child someday. What I found so encouraging through the words of Krista, was the trust she had in God while in the middle of heartbreak.

Her experiences remind me that God is in control and no matter what we face in life, He is there, ready and willing to give us the grace, strength and peace we need for what lies ahead. 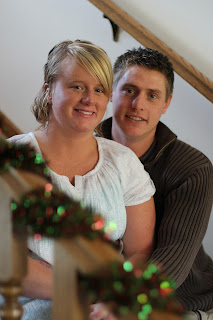 With my first pregnancy, Caleb and I found out I was pregnant around six weeks.  I went in for my first appointment at twelve weeks.  The doctor performed the regular checkup and then began looking for a heartbeat.  He was unable to find one and said it might be a little early.  I knew at that point that something was wrong - usually you can pick up a strong heart beat at nine weeks.
The doctor sent me home with plans to schedule an ultrasound.  I remember laying in my bed, bawling my eyes out.  I knew something was wrong.  Caleb had to go back to work, so my mom went in with me for the ultrasound.
The technician performing the scan said nothing due to hospital policy, but all I saw on the screen was an empty sac where the baby was supposed to be.  She sent me home and told me that the doctor would call me in the morning.   I was so frustrated!  I wanted to ask, “Are you kidding me?  You want me to wait until tomorrow for you to tell me the obvious - that my baby is gone?!”
At that point I started getting very bitter and angry, asking God WHY? Why did this have to happen to ME?!  What did I do to deserve this?!  We went back in the next day.  Soon the doctor came into the room with the words I didn’t want to hear.
“I have bad news,” he said.   My heart sank as he went on to tell us that the baby had died between one to four weeks.  What I had now was called a blighted ovum (empty sac).   At this point, my hormones were still telling my body that I was pregnant - even though there was no baby.  This was the cause for my continued pregnancy symptoms.
The doctor tole me that I had two options - have a D & C procedure or simply allow my body to take care of it naturally.  I chose the latter.
A week later, I woke up early with more pain that I had ever been in in my life.  It was a long, emotional day.  Thankfully, my mom was able to come over to offer me support.
After supper that night, I knew it was over.  We placed our baby’s remains in a little box and buried it in my parent’s flowerbed.  It was so difficult for me to let go - to say “good-bye”.  Caleb dug the hole and I put the box in and he wanted me to cover it, but I couldn't. 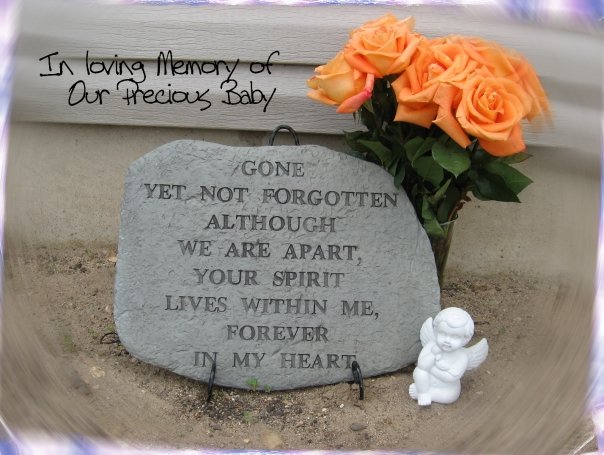 Weeks past and I would find myself crying, asking God why.  It was really hard on me when I found out my friends were getting pregnant and having babies.  Oh, I was happy for them... but there was something deep down that just hurt.  It was during this time that a friend gave me a book called 'In a Heartbeat' and I found so much encouragement within its pages.
Nine months later, February 1, 2010, I discovered I was pregnant for the second time.  I can't begin to describe the feelings that I had that day.  I was excited, nervous and scared all at the same time.  I told my dad and right away I started crying, he held me and said that everything was going to be ok.  He prayed for me and the baby's protection.
Determined not to take any chances, I called the doctor right away.   This baby was going to go to full term!
At my first checkup, they performed an ultrasound and to my delight we could see the baby although the heartbeat was faint.  According to my calculations, I was just over seven weeks along, yet the baby wasn’t measuring quite that big.  The doctor scheduled another ultrasound for the following week.  We left excited at the news that by the next visit we would be able to see and hear the heartbeat! 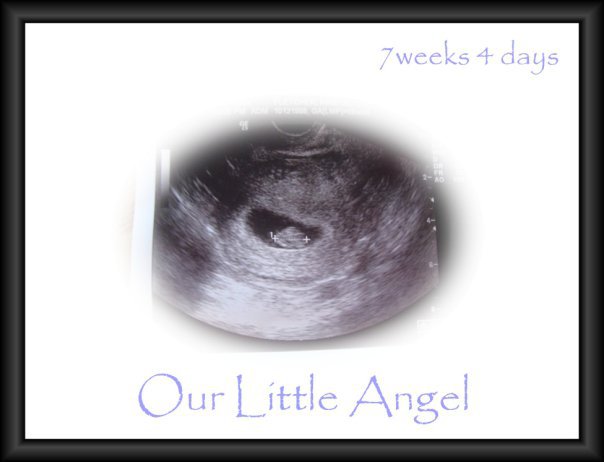 A week later I was back.  I lay there on the table amazed at the most beautiful sound I had ever heard - our baby’s heartbeat.  145 beats per minute.  The technician printed off pictures and with a smile on her face informed us that everything was looking great!  It was music to my ears.
I felt great over the next several weeks.  I even got to spend a week in Florida with my mom, my aunt and my grandma. I kept thanking God for this baby and felt so blessed to not be experiencing morning sickness.
But the morning I returned home from Florida, I began experiencing the telltale signs that I was once again losing a baby.
I fell to my knees, crying out to God,  “Noooooo!  No!  This cannot be happening AGAIN, God!   Please, please, don't take my baby!  You have no idea how bad I want this child, God.”  Tears fell down my face as I begged for the life of my child.   “I can't go through this again, God.”  But suddenly my prayer changed.  Instead of focusing on my own wants and desires, I prayed that He would give me a peace and understanding for whatever lay ahead.  I struggle to find the words for what happened next.  For in that moment, a peace entered that little bathroom where I knelt.  A peace like I’ve never experienced before.  I stood and walked out that door, a brokenhearted woman, yes, but a woman who had peace that God was in control.
We told our family and friends that I was afraid I was losing the baby and they began praying.  I took to the couch, hoping that complete rest was the answer.  The peace stayed with me, and I felt that no matter what happened, everything was going to be ok.
I had a lot of ups and downs throughout the following week.  The devil played with my mind so much telling me it was my fault that I wasn't keeping my babies and that I wasn't good enough.   On March 24th, Caleb took me to the hospital where another little life slipped from my body.
I’ll never forget the moments I had as I laid there on my hospital bed - just talking to God.  That peace He had gifted me with earlier was still present and I relished in the beauty of it.  Peace like that... in moments like that... that’s a peace that can only come from Him!
As I waited for the D & C, friends and family stopped in to pray and encourage me.  Later my mom would tell me that her and my dad were amazed at my demeanor.
“You didn’t look like a person who was going through a loss like that,” she said.
I simply smiled, “That... that was all God! It was His peace that brought me through.”
Time went by and I continued to long for a baby.  Even now as I look back, I see God’s hand working in our lives though.  While I questioned God, wondering when He would grant me the desires of my heart.  But it was in that time that Caleb and I were able to make a life-changing trip to the Dominican Republic.  I know now that I wouldn’t have been able to go if I had been pregnant.
After we returned from the D.R., Caleb and I discussed whether we were ready.  The memories of the past two miscarriages brought a lot of “what if’s” to our minds and we weren’t always on the same page about what to do.
Through the next several months, I came to a place of needing to fully rely on God and His perfect will.  Caleb and I had finally agreed that we were ready to try for another pregnancy, but now, it wasn’t happening.  One negative result followed another and I struggled with the whispered lies of the enemy, telling me that I wasn’t good enough to be a mom... that this was somehow my fault... so many emotions!
One day I sat at my parent’s kitchen table crying my eyes out as I told them my struggles.  They encouraged me, reminding me that my life was in God’s hands.
“Ok God, its all in Your hands. In Your perfect timing it will happen.”
That November, I took a pregnancy test on our anniversary and to my astonishment, it was positive!
We spent the day excited and happy as we celebrated this precious gift, but only six days later we were once again hearing the words that felt like a knife in our hearts.  I had miscarried once again.
Caleb and I held each other as I cried.  I remembered that peace God had given me in the previous miscarriage and I begged for His comfort once more and He graciously responded.
The Sunday morning after my third miscarriage, there was no way I was going to stay home.  I needed the comfort and encouragement of my church family!  And how thankful I am that I went.  A group of ladies surrounded me, prayed for me and whispered verses of encouragement.
One that I cling to is this “Delight yourself in the Lord, and He shall give you the desires of your heart.” Psalm 37:4


It’s been two months since we lost our third angel baby.  Since then, I’ve done some doctoring and have a game plan for the next time.  I don't know when that will be, but I know God's timing is perfect.  I believe that in His perfect timing we will have a baby.

Yes, it's been difficult and I've asked God why, why do we have to go through this for a third time? I still have my moments when all I can do is cry.  It’s in those moments that I feel God's arms wrap around me and I know our three Angel Babies are perfectly safe in His arms and one day we'll get to see them and hold them.

NOTE:  Caleb and Krista are currently preparing to serve in mission work in Nicaragua.  You can follow their story here.

I've learned by now to be quite content whatever my circumstances. I'm just as happy with little as with much, with much as with little. I've found the recipe for being happy whether full or hungry, hands full or hands empty. Whatever I have, wherever I am, I can make it through anything in the One who makes me who I am.  Philippians 4:13 MES

Posted by Lynette Carpenter at 8:03 AM